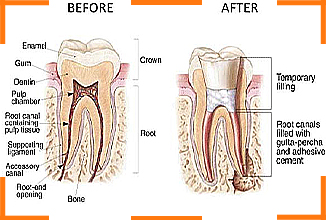 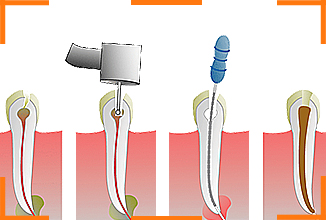 Increasingly, the term ‘‘root canal’’ has become fashionable and generally known. In conversation, people proudly proclaim that they have had a ‘‘root canal.’’

The stigmata of fear and pain are fast disappearing root, a small device is inserted into the wound, and a cavity is cut into the exposed dentine in the root. As much dentine as
possible is removed, and the root canal is then plugged with a filling material, which fills
the canal and seals the end of the root. The operation is performed strictly under aseptic conditions.
At a time when successful outcome in endodontics has vastly improved, and the stigma of painful root canal therapy is disappearing,treatment time has also been shortened.

HUMAN TOOTH ANATOMY
Human tooth is composed of a crown portion which is visible outside the gums and root which is firmly held in bone and is present in the gums. Crown portion has two hard layers enamel and dentin. Root on the other hand has cementum as outer covering and dentin on the inner surface. Innermost portion of the tooth consists of soft tissue which comprises blood vessels and nerves is called as Dental pulp.These soft tissue structure provides for the nourishment and vitality of the tooth structure.